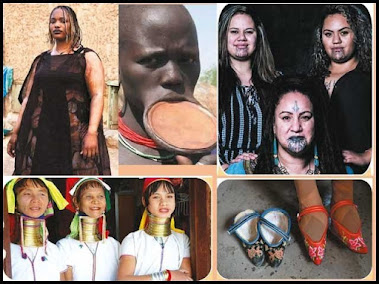 The women in the photo, who look like iron wires around their necks, belong to a special tribe in Myanmar that has maintained its unique identity and centuries-old tradition of long-necked customs. Are The name of this tribe in Myanmar is ‘Qian tribe’. According to local traditions, the longer a girl’s neck, the more beautiful she will be. The struggle to achieve this long neck begins at the age of five with long brass ring-like strings around the neck. When the wires start getting smaller, they are replaced by bigger wires. The price that the women of this tribe pay for their beauty is unbelievable.

You may have seen many people getting tattoos on different parts of their body. It has different meanings and significance in different cultures. Body tattoos have been practiced in New Zealand’s indigenous tribes for nearly a thousand years. The locals call these permanent marks Ta-Moko, which is characterized by piercing them with black or blue. They are mostly made on the face such as on the lips, a little on the cheeks. Special tools are used to make these tattoos. Historically, looking at its background, in ancient European civilization, such marks were on the faces of those who were considered socially respected. And such people would be considered experts in any field. These signs are considered a symbol of beauty as well as courage and perseverance in women.

You may have heard that eating in earthenware pots increases the taste, but you have hardly seen anyone with earthen plates on their lips. You must have been shocked, too, that Ethiopia has the most beautiful standard of beauty in the Morsi tribe. It is customary to press hard clay plates into the lower lip to make the lower lip look bigger and thicker. For this purpose, as soon as the girls reach the age of puberty, two front teeth are removed from under them and a hole is made in the lower lip in which a plate made of hard clay is placed. Thus, the thicker and sagging the lips, the more beautiful and attractive this girl is considered to be.

Everywhere you look today, the tide of protectionist sentiment is flowing. But today, of course, you will be amazed to know that the region is also a place on earth where the obesity of girls is the standard of their beauty. Yes, in the West African country of Mauritania, obesity is considered a beauty standard and girls are sent to regular campuses to prepare for marriage (obese). In these camps, they are given more than 16,000 calories a day, which is four times more food than a male bodybuilder.

Daughters are given more food as soon as they are born and girls between the ages of seven and fourteen are sent to camps where they are fed heavy and solid foods such as goat’s milk in liters, cooked foods in fat and special ingredients. Disadvantages and persecutions are that if a girl refuses to eat such a large amount of food, she is regularly intimidated and in some cases even beaten. They are even given appetite suppressants. And the fatter the girl, the more suitable and beautiful she will be for the boy.

You may have heard about the beauty of the lotus flower, but you will certainly be unfamiliar with the custom of making the feet the standard of beauty like the lotus flower. You may be surprised to hear that in ancient Chinese culture, tying the feet of girls was a custom. Girls had to sacrifice their thumbs and toes for golden lotus-like feet. The price paid for hoping for a good relationship was, in fact, very high.

Mothers would tie the feet of girls between the ages of six and seven with a cloth so that they would fit into small lotus flower-shaped shoes. This would have made it impossible for the feet to grow and thus would have made it possible to obtain feet that look like lilies. However, there are conflicting opinions that this tradition was nothing more than a beautiful hoax that limited women to their homes and forced them to work. Whatever the reasons, it was in fact a painful process that was eventually banned by the Chinese government in 1940. Nevertheless, the practice is still practiced in many Chinese villages, where small feet are a symbol of high status and beauty.